In order to give you a better service Edigem uses cookies. By continuing to browse the site you are agreeing to our use of cookies. I agree.

The Art Deco design movement had its beginnings in the late 1910s and early 1920ies. Heavily influenced by the preceding Art Nouveau period, the movement’s official beginning can be traced back to the Exibition International des Arts Décoratifs et Industriel Modernes, which was held in Paris in 1925. The name Art Deco was derived from an abbreviation for this ground-breaking exhibition. Although the world was still recovering from the devastations of the First World War, the 1920ies were a time of economic prosperity and long accepted social standards were questioned and redefined.

The Art Deco style is as intimately linked to these roaring 20ies as the advent of jazz music and the flapper. The style, which found its way into architecture, art, fashion as well as jewellery, was characterised by its heavy use of geometric patterns, mixture of modern and traditional materials and a definite interest in ancient cultures and exoticism. For jewellery, the Art Deco style relied heavily on several distinguishable design elements. Most jewels crafted during this time were cast in platinum and the diamonds set into these works of art were often cut in the old European style. Geometric designs and filigree patterns are found very regularly in jewels created in the style of Art Deco.

For your pleasure, we have picked some of our favourite Art Deco jewels. Read on and enjoy with us the exciting optimism and ravishing beauty of the roaring 20ies. 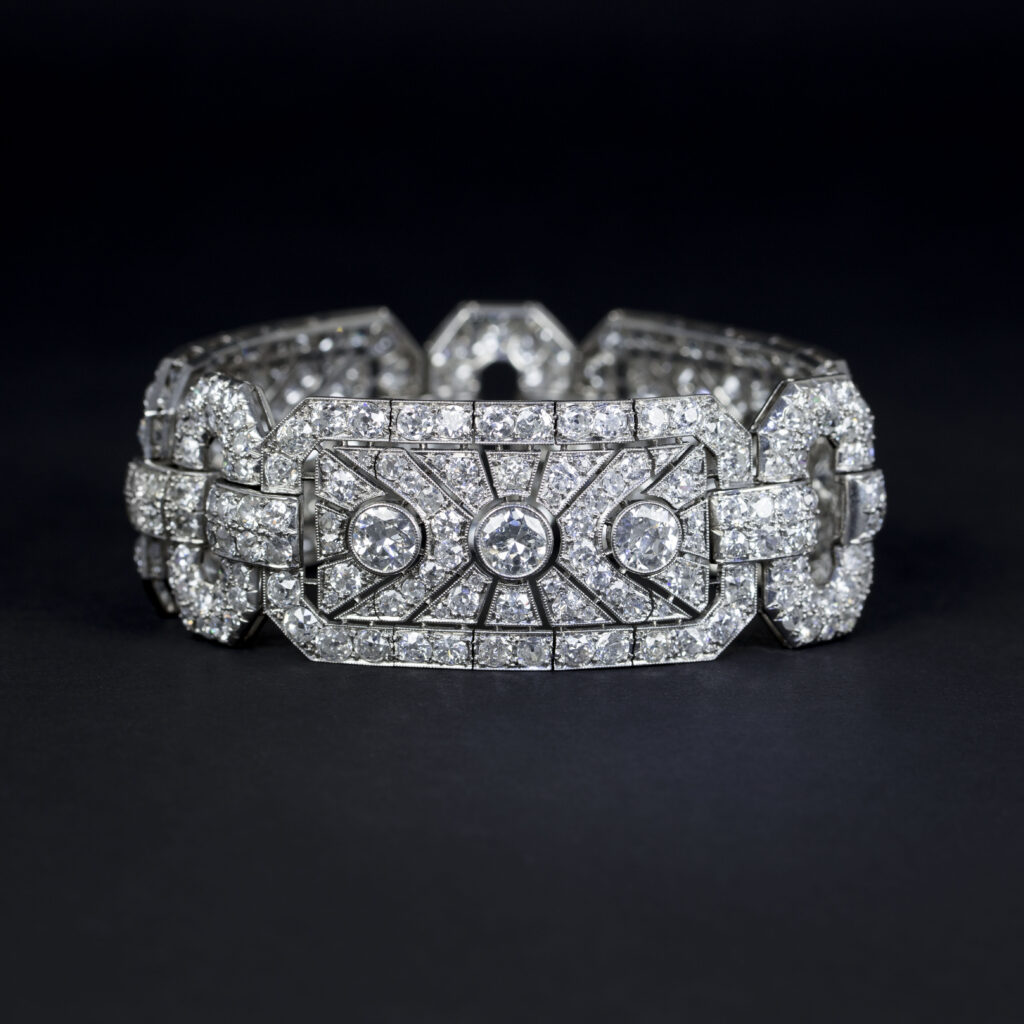 This delicately crafted bracelet from the 1930ies is a perfect example for an Art Deco jewel. In it, several attributes typical for this style complement each other beautifully. Cast in platinum and featuring beautiful old-cut diamonds, the jewel shows a magnificent variety of geometric shapes and patterns. In its excitement and pure elegance, it perfectly represents what Art Deco jewellery is known for. 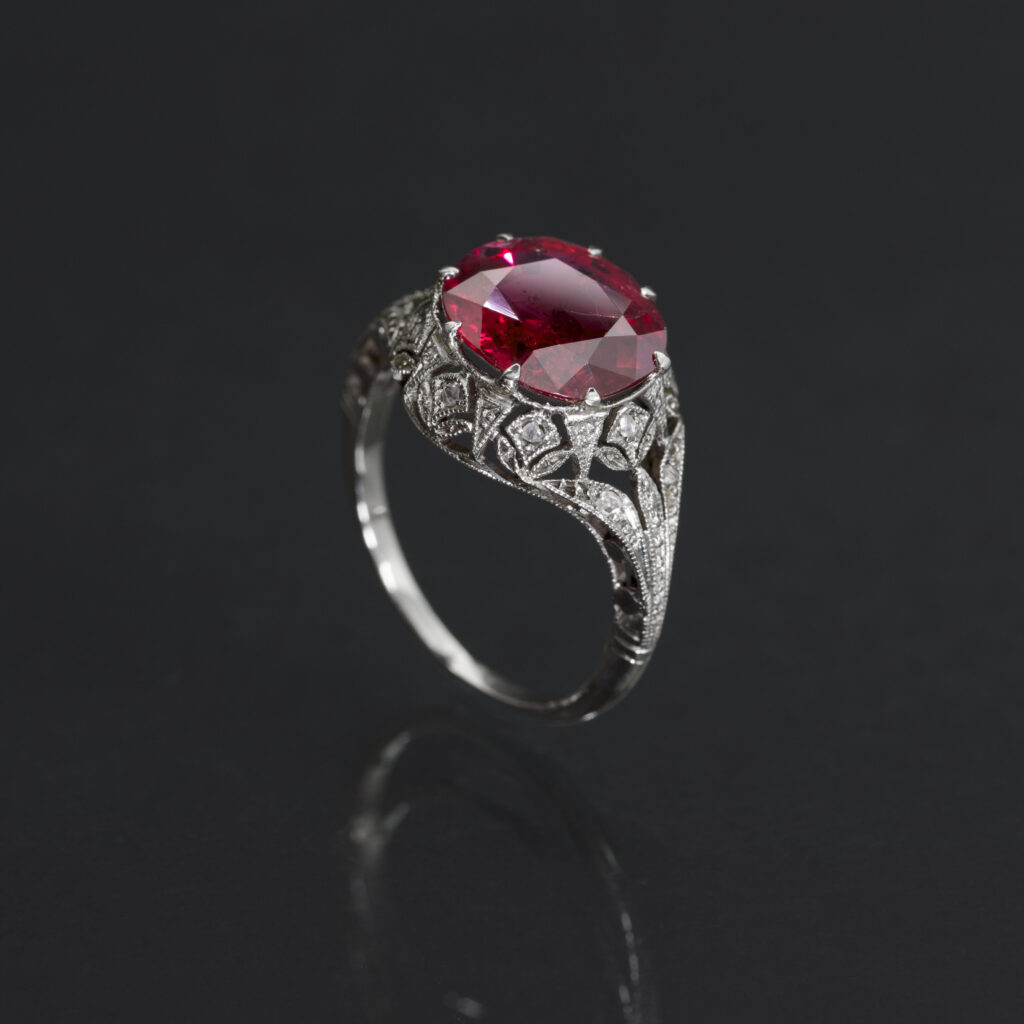 The elongated triangular shapes in this stunning ring can be found not only in many Art Deco jewels, but also in the buildings designed in the 1920ies. One prominent example of a building designed in the Art Deco period is the famous Chrysler Building in New York. The triangular shapes are prominently displayed in the top part of the building. This precious ring features a magnificent Burmese ruby of 4.08 ct. Rubies from today’s Myanmar count among the most coveted gemstones in the world and the exotic nature of this precious gemstone’s origin is definitely fitting for a jewel crafted during the Art Deco period. 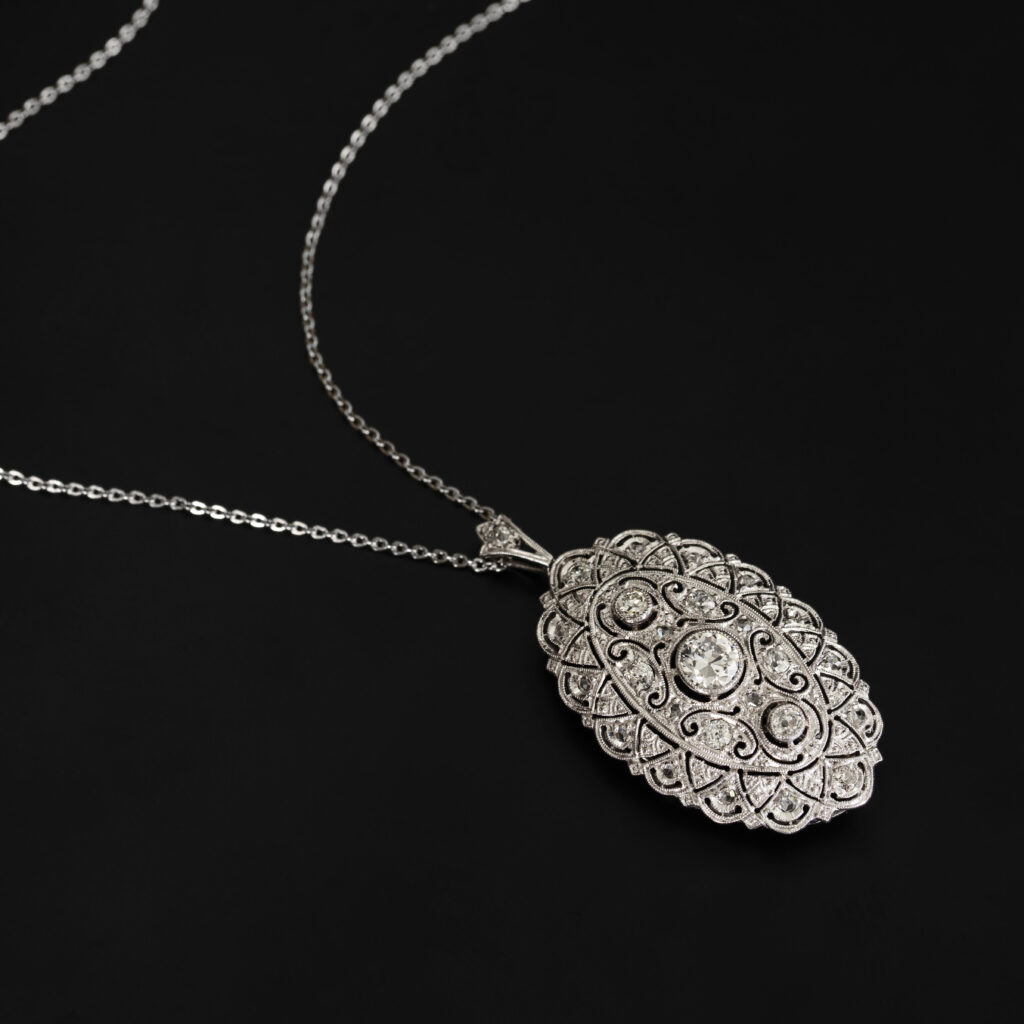 Another important factor that distinguishes Art Deco jewellery is its filigree workmanship. In this beautiful pendant, delicate decorative motives complement each other and draw the eye towards the scintillating diamond in its centre. 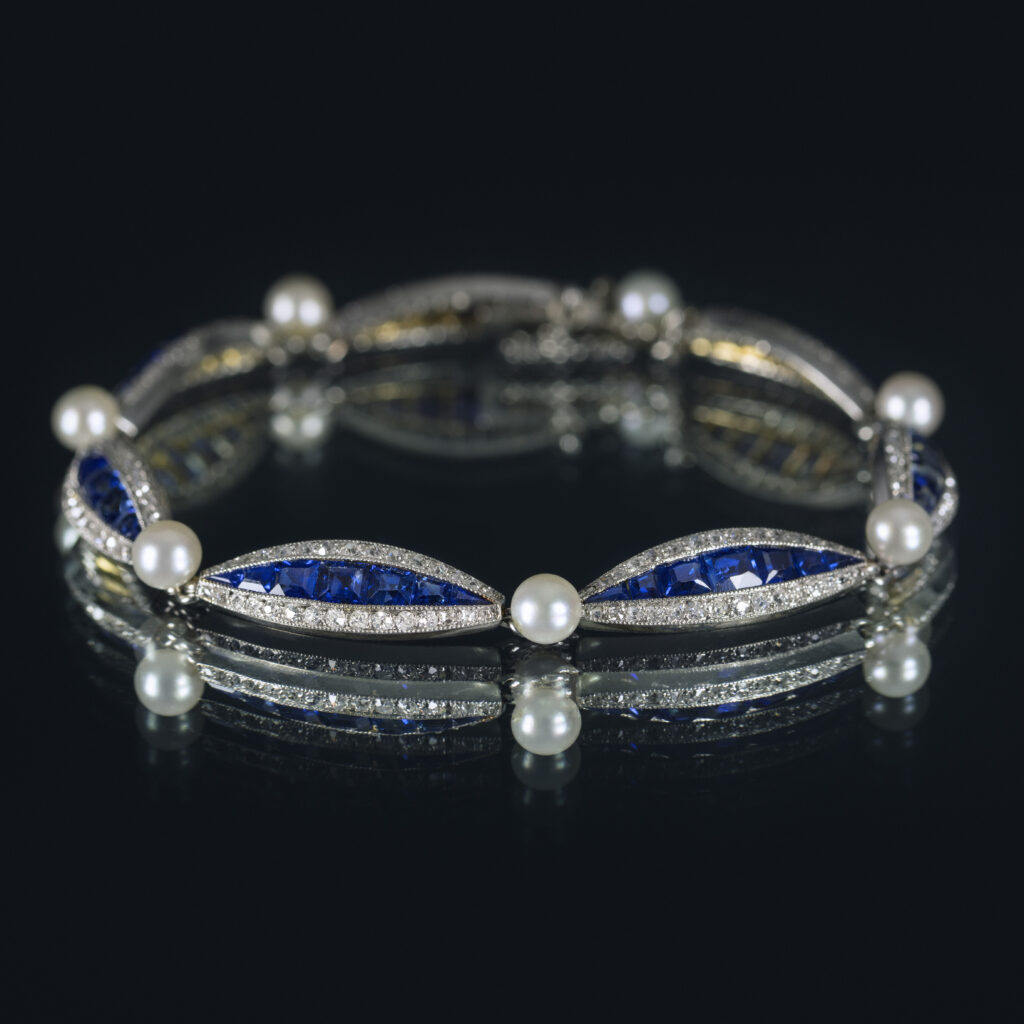 A very special element typical for the Art Deco period can be seen in this bracelet. The precious blue sapphires in this beautiful bracelet from the early Art Deco period are calibré-cut, a cutting style that is intimately connected with Art Deco. Gemstones in this special cut are shaped with a particular jewellery design in mind and fit snuggly into the finished jewel. The gems are cut specifically to create one unbroken surface and not to allow for any space between the individual stones or the gems and the metal.  210 old-cut diamonds and seven beautiful natural pearls embrace the precious sapphires and give this unique jewel an elegant finishing touch. 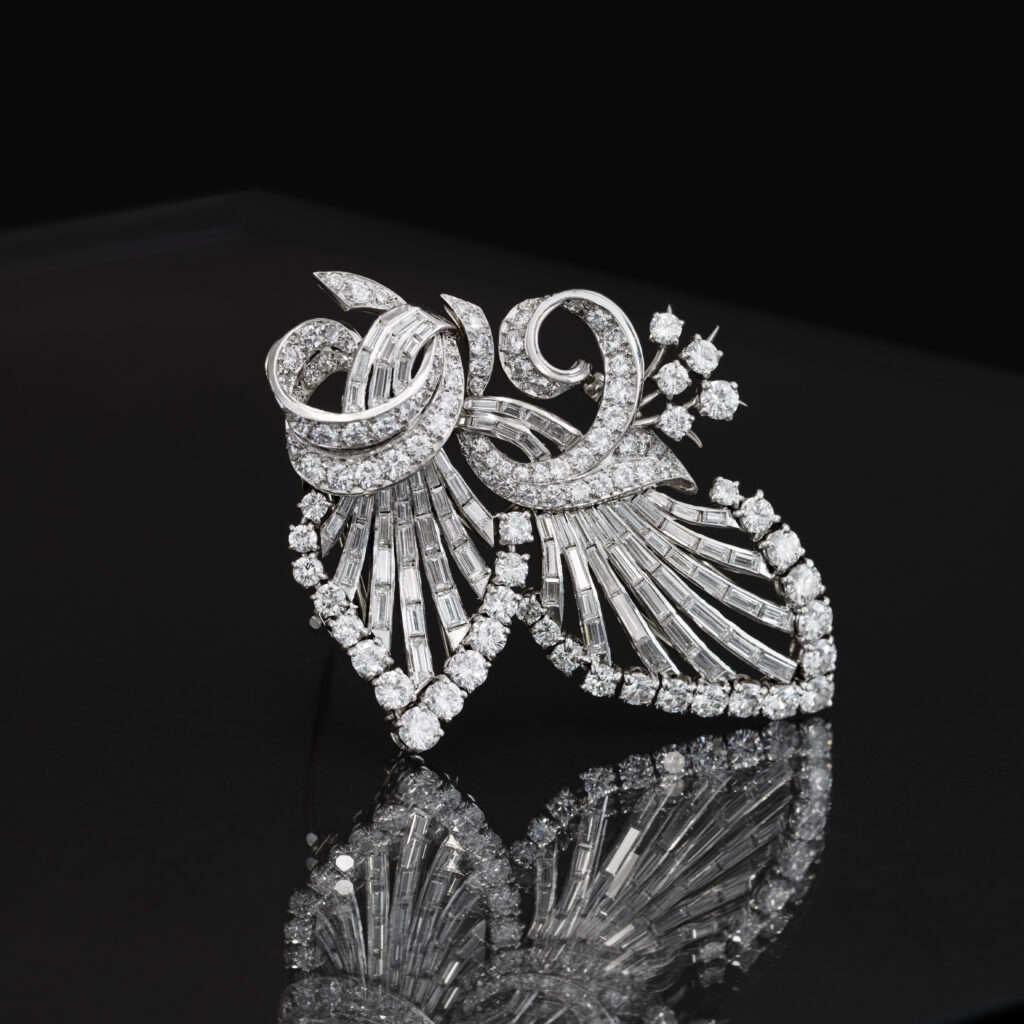 The last jewel in the Art Deco style we would like to present to you is special, because it was not created during the Art Deco period. The style has had several revivals since the 1930ies, when it largely disappeared because of the great depression and the rise of World War II only a few years later. This precious brooch was created in the 1950ies, its 188 baguette and brilliant-cut diamonds beautifully showcasing the geometrical shapes and intricate designs that distinguish the Art Deco style.